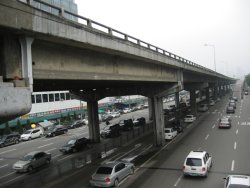 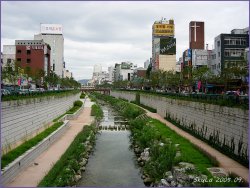 It’s been an eventful two weeks. A ton of urban conferences hit Vancouver: the World Urban Form, the Canadian Institute of Planners Congress, and Planners4Tomorrow.
Enrique Peñalosa gave an inspiring talk about his time as the mayor of Bogotá, Colombia. In a city where less than 20% own a car, why was so much downtown space devoted to automobile movement and parking? He helped institute policies enforcing sidewalk parking bans and limiting automobile access to the downtown. He rejected a Japanese consortium’s $5 billion freeway plans, and instead built a Bus Rapid Transit system similar to the one in Curitiba, Brazil. He built major bikeways, and the city has seen cycling mode share go from 0% to 6% in under ten years. Once people feel safe biking, they’ll do it.
The idea that banning cars can be democratic is interesting, but not very relevant in a Canadian context. In fact, the opposite argument could be posed: non-auto ridership is under 20% in most cities. However, in Bogota the issue was not that car drivers were in the minority, but that they consumed a disproportionate amount of public space and resources. Transit riders in Canada may be in the minority, but they save public money and space. I did read a British report from the 1960s (Traffic in Towns) that anticipated the problems when car drivers reach a majority of the population. British planners could see what had happened in the USA when car ownership passed that threshold. They were rightly concerned about the political difficulty of slowing motorisation once car owners were in the majority. But they didn’t find any way to stop it.
Peter Newman and Jeff Kenworthy were in town last week, and they gave independent talks on the same day. They’re famous for sparking a debate on the relationship between city density and fuel use per capita. After studying several North American, European, Australian and a few Asian cities, they found that there was an inverse relationship between fuel-use-per-capita and urban density. This sounds uncontroversial to the lay person – if things are closer, people need less gas to get around, or they can walk or use transit. However, it sparked a massive debate in the planning world. I’m mostly in their camp, although I’m still skeptical about some of the policy conclusions they’ve drawn. See some of my notes if you’re interested.
Both of them highlighted one fascinating story: the Cheonggyecheon River in Seoul, Korea. The photos on the right show the situation “before” (2003) and “after” its recent reconstruction in 2005. You see that correctly: twelve lanes of traffic (eight below, and four above) were replaced by four lanes, and the river that had been buried beneath in the 1940s was “daylighted” once again. Bridges across the river were rebuilt, changing the barrier expressway into a regular road. Cheap? No, it came with a price tag near US$900 million, although it’s expected to attract about US$12 billion in investment in the surrounding area. Still, a beautiful way to remake a city. Imagine a similar project on the Gardiner Expressway in Toronto, allowing the city to reach its neglected and disconnected waterfront…

2 thoughts on “Sustrans talks galore, and the story of the Cheonggyecheon River”