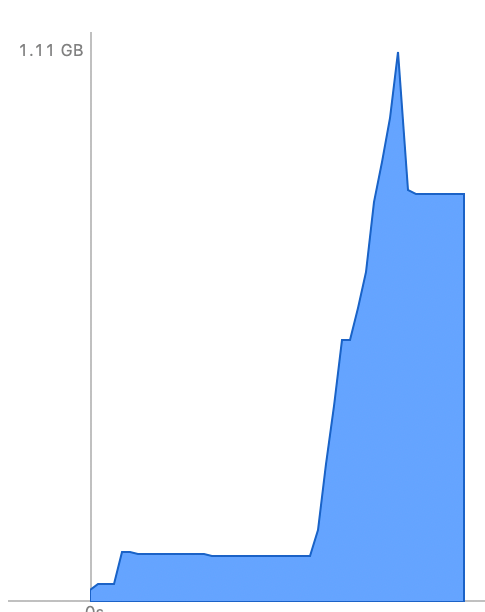 At Mental Canvas, Dave Burke and I recently resolved a memory leak bug in our iOS app using the Metal graphics libraries. Memory management on Metal has had a few good WWDC talks but has surprisingly little chatter on the web, so I thought I’d share our process and findings.

The issue: a transient memory spike

Our sketching app does a lot of rendering to intermediate, offscreen textures. In the process, we generate (and quickly discard) a lot of intermediate textures. A lot of that rendering happens in a continuous batch on a dedicated thread, without yielding execution back to the operating system.

A consequence of that behavior: our memory footprint grows rapidly until we hit the critical threshold — on a 3 GB iPad Air, about 1.8 GB — and then iOS summarily kills the app. From our app’s perspective, memory footprint is only growing gradually, as most of the memory usage is temporary intermediate rendertargets; they should be freed and available for reuse. But from the operating system’s perspective, it considers all of those temporaries to still be in use.

Which led us to the question: why? And how do we figure out which temporaries are leaking, and which Metal flag / call will allow us to return that data to the operating system?

From our empirical reviews of the various tools, we can say the following:

One thing that caught my eye immediately: when working with a smaller batch of data (which didn’t hit the memory limit), the XCode memory graph showed an “overshoot.” During processing in the graph here, we hit a peak of 1.1GB memory used, but then subsided back down to a steady state of about 840MB once processing completed.

This suggested that there was not a true memory leak — clearly our code only referenced 840MB of memory, and once the operating system / GPU / drivers had time to “clean up” any unreferenced memory, 260MB was being released. If we could avoid that spike, our peak memory usage would be 25% lower.

So, why would that happen? Where are those large blocks of data being held?

The large data objects are virtually all MTLTexture objects. They’re being written (i.e., used as rendertargets) in one phase of our processing, then being read (rendered to another rendertarget) in a later phase. Mechanically in Metal, that means a reference is being held by one or more MTLCommandBuffers that hasn’t completed executing yet.

As pseudocode on the CPU side, that looks like this:

Those MTLTexture objects are therefore held in several places, via reference counting. This allows us to formulate several hypotheses:

Of the five hypotheses I presented, it turned out that #1 was the key. We had CPU-side references that lasted longer than we wanted — because of the way that autorelease pools operate.

Let’s talk through each hypothesis:

With a newfound respect for autorelease pools, we’d solved the issue. The revised pseudocode is shown below, including debugging capture after processing item #10. New lines are in bold.

And indeed, the transient memory spike was gone. The memory available after draining the autoreleasepool appeared to match the size of the temporary buffers allocated. We had a nice smooth rise to the steady state, and a 25% reduction in peak memory usage. We still had to work some magic to operate on big content — 1.7GB will still only get you so far — but predictable transient memory behaviour was a big step forward.

“Successful platforms do not just discover what consumers want — they produce the consumers and the forms of consumer desire that they need.” –@wrbucla

Worth reading if you’re concerned about so-called AI art platforms.

Before going public via SPAC, Bird raised $2.1bn from private investors. Billion with a b.

Bird is now worth just 3% of all that VC funding.

Kids are suffering from #COVID19 in ways we never expected, by ⁦@picardonhealth⁩ via @GlobeDebate #pediatrics #RSV https://www.theglobeandmail.com/opinion/article-kids-are-suffering-from-covid-in-ways-we-never-expected/

A word on the idiocy known as "immunity debt". How did such a nonsensical idea take hold?

Simple. The obvious mental model for our immune system is a muscle: use it or lose it. Muscles atrophy when we don't use them. The same mental model works for our memories & skills.

Here’s the “summary map” attached to the proposed amendments to the Greenbelt, showing additions and removals/redesignations. https://ero.ontario.ca/notice/019-6216 https://twitter.com/alexbozikovic/status/1588610139594047489

Elon: I want to own @twitter
World: That is a bad idea!
Elon: No, it’s a great idea! Give it to me!
World: Twitter will be your Waterloo…
Elon: Awesome, I hear they have a great CS department!

A chronicle of the first europeans to sail the whole Amazon river, in 1542, was unpublished until 1895. It describes indigenous "large cities, well developed roads, monumental construction, fortified towns, and dense populations" but was dismissed as lies...until this year

I feel this so much. We need to talk more about the actual work of computational and data-intensive science. https://twitter.com/jamespjh/status/1585312766310875136

I’m also really appreciating @NextPicturePod as a way to find good movies. My favourite film writers (ex-dissolve, ex-avcub), just shooting the shit. They also pointed me to Soderbergh’s new Kimi , which I quite liked.