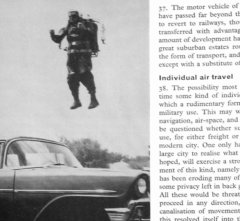 A great link from vyaroshevich (via Price Tags and Thrilling Wonder). The flickr photo below shows a horrific left-turn in Russia. The route starts from the left (lower line)… and just follow the arrows from there. If I was on the road, I’m sure it would soon seem fairly natural, actually… we’re very well-trained in the mysterious ways of cloverleaf interchange.