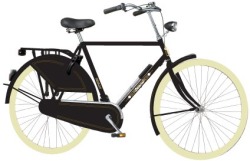 Growing up in Toronto, I was a six-month cyclist and six-month pedestrian/transit rider. Since moving back a few years ago, I’ve been shifting to closer to ten months of cycling. I realized that I feel much better when I get that daily exercise and sunshine, and it’s considerably faster for getting around, chaining trips and running errands.
In the process, I’ve been trying to find the right bike for the job, and have just bought a pricy Dutch bike for the coming winter. My summer bike is out of the question; it’s a nice bike, and far too vulnerable to the winter salt, grit and filth.
Bicycle #1. 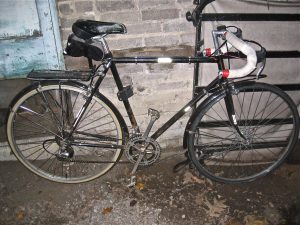 I bought this road bike at the nadir of my student bank balance for $100. It’s as old as I am and a little too small. It handled reasonably well on the winter streets, the narrow tires were good at punching through the snow to find pavement, and the vintage handlebar-end shifters were easy to use with big mitts. The caliper brakes are the deal-breaker though: quite weak in wet conditions, and so tight around the wheel that I can’t have both fenders and knobbly tires. I rode it over the two winters of 2006-2008, when I lived in an apartment building. In that building, I could use the underground parking garage for cleaning and regular maintenance, and the bike thawed overnight in slightly-above-zero conditions. Rusting was a major problem: a new chain and rear cluster every spring, often cables as well, and a lot of surface oxidization wherever the paint had chipped off.
Bicycle #2: 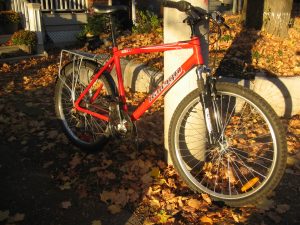 I won this ultracheapo “mountain” bike in a draw at work. It only came in one far-too-small size, but I had hopes that a trashy department store “mountain” bike with better brakes would be okay in the winter. I sank some cash in fenders, rack and lighting and waited for winter, when my hopes were quickly dashed. The brakes were strong, but the size was painful and the cheapo shifters and drivetrain were unreliable. Plus, I moved to a house without a garage, and the bike was sitting outside in rain, snow and freezing rain, taking a real toll. The bike couldn’t thaw overnight, and maintenance was impossible since I had no indoor space where I could work. I used it for one season, and was forced to ride transit much of the time. With a new chain it’s still rideable, but it’s pretty clear that another winter will destroy the drivetrain.
Bicycle #3:

after doing my research, I learned that Dutch-style city bikes are often recommended for winter cycling. The internal gearing reduces derailleur maintenance, the fully enclosed chain keeps out dirt and ice, and internal drum or coaster brakes work better in wet conditions and need considerably less maintenance. The longer wheelbase and heavier weight make it more stable, and the built-in heavy-duty metal fenders keep the rider clean. In Amsterdam, most apartments don’t have indoor parking space, so they’re designed for parking outside on the street in the rain: low-rust stainless steel all over. The Netherlands gets a lot of rain and some snow, and uses salt on the roads; but I imagine that Toronto will be a more demanding environment.
After doing test rides up a major hill from Bloor to St. Clair, I decided that a five-speed model was necessary here, and I settled on a Batavus Fryslan from Curbside Cycle. The rear coaster brake is quite responsive, the front drum brakes less so, but both work just as well in wet weather. The big question: after dropping cash for an expensive low-maintenance bike, will it get destroyed over the winter? Stay tuned.
A final note on tires and winter: from what I’ve read, my intuition on the subject may be wrong. You’d think that big, knobbly tires would be good, possibly with metal studs for ice. But from what I’ve read:

Be careful with information on the web – a lot of it is for people who are riding winter trails on mountain bikes, not city streets. On a narrow four-lane arterial with streetcars, controlled skids are not an option.