In the previous post, I looked at a few of the “big impact” policies. At the time, I focused on the “aggressive” deployment level. In this section, I want to switch gears to the “maximum” deployment level and dive a little deeper.

Let’s take a look at a few of these policies in detail, and see what “maximum deployment” really looks like.

How big is it? What does that feel like?

The “aggressive” level of deployment reduces emissions by 4,410 MT and the “maximum” level goes much further, to 15,186 MT.  This is the one policy where the maximum level is vastly bigger than the aggressive level.
How big is the carbon price that produces these huge reductions in emissions? The challenge with prices like this is usually units: what does a “per-mile” or “per-gallon” tax really add up to, and how does that compare to existing taxes, or to a “per-tonne-of-CO2” price? As a Canadian, I find it very hard to relate to all of the U.S.-denominated prices, so I’m going to express everything in both imperical and metric units and in US dollars, Canadian dollars and Euros.
Let’s start by looking at how these carbon prices are set up:

For illustrative purposes, the report authors have designed the tax to stay at a flat level on a per-mile basis over the study timeframe of 2015-2050.  However, because the vehicle fleet is getting steadily more fuel-efficient over that time, that means that the price per gallon has to rise steadily over time.  Let’s look at it now in terms of the price per gallon:

Fair enough so far. It should now be clear that the both the “aggressive” and “maximum” taxes are fairly substantial. The graph below now takes a look at how that compares to the future price of gasoline, and also includes the existing US gasoline taxes. For comparison, I’ve also included several international 2010 gasoline prices at the left, so you can see how other countries’ existing tax policies compare to US tax policy. 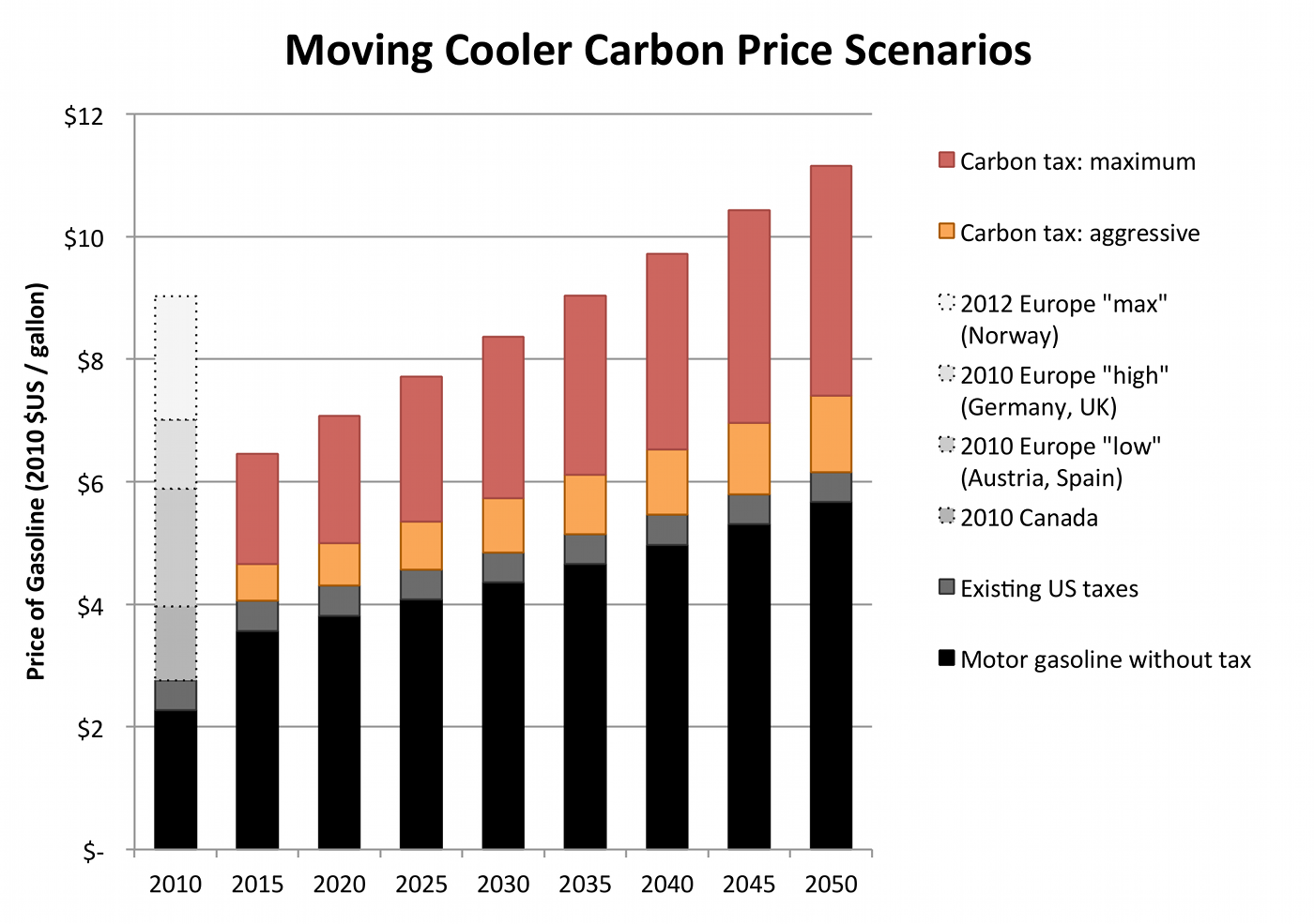 Perhaps this sounds large. Let’s take a quick look at what the daily and weekly expense for a typical American driver would be.

To me, this helps to really understand how these taxes would work:

How does it look as a carbon price?

That gives a sense of how this pricing scheme looks to drivers, and how it compares to existing gasoline taxes. But what is its size as a carbon tax?

Both the aggressive and maximum carbon prices shown are quite substantial. Let’s glance at a few other current carbon prices just to give a sense of scale:

As this list shows, the “aggressive” and “maximum” carbon pricing policies from Moving Cooler are significantly higher than existing carbon taxes around the world.
So, the upshot is that the “maximum” carbon policy:

In the end, this is the reality of gas taxes versus carbon taxes: there’s a long history of high taxation of gasoline, and high taxes are what are required to genuinely affect driver behaviour.  By comparison, there’s little precedent for high taxation of carbon emissions generally, and tax levels remain quite low for non-gasoline products.

This also means that the “maximum carbon price” policy may not be the most economically efficient way to start reducing emissions. If we treated all forms of carbon equally and set a carbon price of – say – $150/T, this would be high enough to decimate emissions in many other sectors, while still only having a modest impact on transportation emissions. In other words, it’s far easier to reduce emissions in the non-transportation sectors than in transportation.  People place a very high dollar value on the benefits associated with driving.

As the executive summary states, “two factors would drive this increased reduction in GHG as a result of pricing signals: reductions in vehicle ­miles traveled (VMT) and more rapid technology advances […] and also creates market conditions that encourage the purchase of more fuel­ efficient vehicles.”
This is an economist’s language. How is a reduction in vehicle miles travelled achieved while still allowing people to go about their activities? Through the many means available:

The concept here is quite simple: lower the national speed limit to 55 mph (90 km/h) by 2015, with significant enforcement effort through speed cameras.
The Nixon government implemented a national 55 mph speed limit in 1973 in response to an oil crisis, and those laws remained in effect until 1995. Enforcement appears to have been quite patchy, however; this initiative would require a serious enforcement effort, which is technically quite feasible using speed cameras. Speeds above 55mph are less fuel-efficient.
Currently, 80% of vehicle miles travelled in large urban areas are at speeds above 55mph, and this rises to 97% of rural VMT. Interestingly, speed limit reductions reduce emissions in two ways: first, by shifting engines to a more fuel-efficient operating point; and second, by making driving significantly less attractive, especially for long distances.

This policy is quite simple: 1) “alter driver behaviour such as avoiding rapid acceleration/deceleration, avoiding speeding, proper gear shifting, and cruise control usage”; 2) encourage “proper vehicle maintenance, such as proper tire inflation, lower rolling resistance tires, and lower viscosity motor oil.”
The delivery is also simple: a communications campaign, combined with mandatory driver education. In Sweden and the Netherlands, training in eco-driving is part of the driver licensing requirements, and also required before obtaining a taxi license. The “maximum deployment” scenario assumes a campaign that is sophisticated enough to reach 50% of the population with different parts of the message, and convince 40% of those reached to implement the eco-driving approach for a net effect of 20% of the total population adopting eco-driving.

This policy is quite ill-defined and baffling to me, to be frank, particularly in terms of costing. The Moving Cooler study tries to build upon a separate study done by Cambridge Systematics called The Bottom Line. That report was done for the AASHTO highway organization, and its purpose was to make the case for more funding for all types of transportation. On the transit side, it doesn’t appear very substantive or coherent to me, unless there are some appendices with more details. This feels like a case of interference by the steering committee: “align with the AASHTO report!” the consultants may have been told, but that gives a really incoherent piece of analysis here.
My interpretation of how The Bottom Line was incorporated into Moving Cooler is as follows. Future transit ridership growth is unknown; it might be 2.4% per year (the rate between 1995 and 2007) or it might be 4.6%. This policy looks at the emissions reductions and costs associated with 4.6% vs. 2.4% annual growth, in terms of maintaining current physical conditions and maintaining current service performance while accommodating growth. Accommodating growth does require construction of some new rapid transit (64% of the budget, apparently), and those are included here.
In other words, it sounds like a set of potential emissions reductions and costs that will occur if ridership grows faster than it has previously. This isn’t really “urban transit expansion” – it’s more like “maintaining urban transit quality through limited expansion to meet demand.”  Also, the cost estimate used here is essentially undefined – neither Moving Cooler nor The Bottom Line gives any real explanation of how the costs are built up, even though this is the second most expensive policy in the list.
So, to me this policy is about “additional emission reduction that might happen if transit ridership surges,” and the cost associated with that surge is ill-defined.
The “Transit Frequency / Level of Service / Extent” policy is more directly about improved urban transit – but it has a considerably lower impact, just 168 MT.

I won’t go into detail on the other policies, but here’s a quick summary of what the top-rated policies are.

Let me draw together my findings from the first and second parts of this posting:

It led to the Game Boy, the 20th century's most successful game console.

Basically, you can innovate with old and cheap technologies instead of obsessing over the cutting edge.

This was not my idea, but i like it a lot: in anticipation of a really stressful few days, @18F is declaring Nov 3 and 4 heads-down days and strongly encouraging all teams to cancel or move non-essential meetings so folks can have a little more space for whatever they need to do.

It's Time to Talk About Covid-19 and Surfaces Again - Wired https://bit.ly/2T8suK3

I hesitated to watch Ted Lasso (“I don’t like sports”), but a friend insisted and I am hooked on it.

Do not seal yourself inside a plastic tent with other people to dine out during a pandemic. Thanks to @DFisman for his input.

Inclusive of all ages, developmental stages, abilities and vulnerabilities

AND possible in both low-density neighbourhoods and high-rises.

“In 2017, the company reported an unusually large spike in revenue — some $17.5 million, more than the previous five years’ combined. It was accompanied by a $15.1 million withdrawal by Mr. Trump from the company’s capital account.” https://www.nytimes.com/2020/10/20/us/trump-taxes-china.html

The people I want to hear from with their Halloween plans is the immigrant family in a tower. I don’t want 700-word emails from affluent neighbours on how we can make this work in a small group for our own kids #Halloween2020

The story for the last two weeks: the surge stabilizes in the centre, and now the outskirts see their own surge. Downtown, Rideau-Rockcliffe sees a big acceleration in cases.