The study is quite U.S.-centric, but I feel the findings could be easily extrapolated to most English-speaking countries, who have all experienced 65 years of substantial post-war growth in low-density auto-oriented suburbs.

What can a full bundle do?

I’m not going to reiterate what the report itself says well. The executive summary is quite clear; I’ll just add my own interpretation. There are a few helpful points to add regarding the baseline scenario: 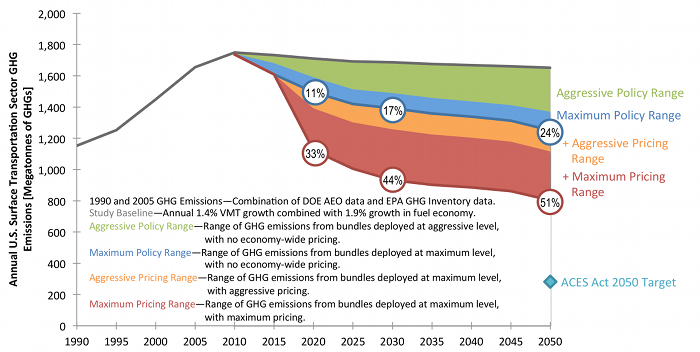 I would characterize the aggressive and maximum scenarios as shown in the above figure (adapted from Figure ES.3). In this figure, I’ve added in the effect of the carbon price / fuel tax  policies. As can be seen, this shows considerable potential for carbon reductions from the full policy bundles studied. The key messages:

The report’s executive summary and figures don’t hammer these points home enough, in my view. 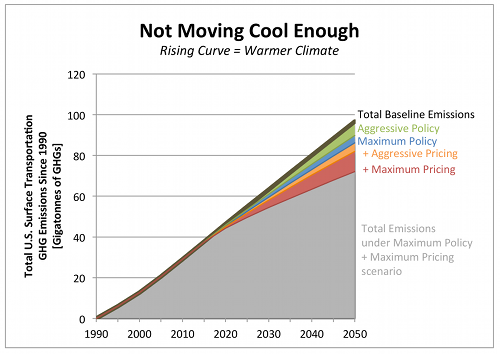 What can individual policies do?

The report’s executive summary does a poor job of comparing individual policies or policy categories. I will draw my own highlights instead. Let’s take a look at each policy category and the “best of breed” policy from an emissions perspective, at an “aggressive” deployment level.

This really says it all:

All of this hinges on the underlying analysis, but I feel it’s pretty solid. The appendices of the report give all of the gory details; they’re stellar examples of how to do high-level “sketch” planning.  At some point, I’d be curious to try it out with Canadian data; I doubt the results would be very different, though.

In the next part of this blog post, I’ll look at:

We urgently need to educate our @ocdsb trustees about how "virtual learning" works (or not) for our kids & how we think about balancing risks & benefits of different school schedules for the fall.

Here's what I learned in a convo w/a trustee this AM:

Texas and California are doing badly - and they've only had an Rt of ~1.15.

Why? They didn't crush the curve before reopening. CA reopened at 2k cases/day, TX at 1k cases/day, and then they grew with Rt~1.15.

"In the middle of a heat wave, at a time when it is infinitely safer to be outdoors than in, the City of Toronto is worried about your beer."

Oh my god, @richardwarnica wrote the story we've all been thinking about and the lede alone is *chefs kiss*
https://nationalpost.com/news/toronto/amid-a-global-pandemic-economic-collapse-and-mass-protest-toronto-has-a-new-top-concern-your-beer/wcm/a169cf70-c314-44b6-8664-28210f985f2f/

And... what about daycares, which opened up at the same time that this started? Do the seven other families that share a daycare room ("regular close contact") count as part of my 10 person circle?

The more media I do on school re-openings, the more frustrated and incredulous I get at the lack of political prioritization of education. It's like watching a slow motion disaster unfolding. We can all see it. And maybe I'm naive, but I didn't think it'd come to this

Excess mortality during #COVID19 in France:

Kudos to @InseeFr for highlighting blatant, scandalous disparities as much as possible with data that are available. https://twitter.com/inseefr/status/1280440671648669696

Wise words from Dr. Bonnie Henry, outlining how #COVID19 transmission is primarily at the droplet end of the spectrum.

"It is important to continue to look at the data, to look at where we're seeing transmission events and adapt if we need to."

A Vancouver dad who let his children take the bus alone has won his three-year fight with the province’s Ministry of Children and Family Development https://bit.ly/3iBjrN9

I know media we’re being careful with this story but can’t understand why the headline isn’t “Current Member of Cdn Armed Forces Made Assasination Attempt on PM at his Home”. Isn’t that what this is? https://nationalpost.com/news/explicit-threat-against-trudeau-and-an-arsenal-of-loaded-guns-make-rideau-hall-attack-look-like-assassination-attempt/wcm/7713ac3f-cf79-4068-bb2d-29e090cb0120/