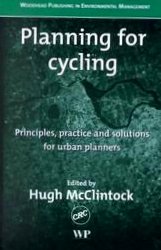 For some time, I’ve been curious to learn more about European approaches to designing bicycle routes. I’d heard the statistics: over 30% of all trips are made on bicycle in Amsterdam and Copenhagen, and even more in some Asian cities like Shanghai. But how did they make bike routes that were safe enough for so many people to feel comfortable doing that? Unfortunately, they publish mostly in Dutch or Danish, not English. The English-language publications I’ve seen have been dominated by American designs, which tend to be either a) stone age; or b) trying to reach the bronze age. (That’s just the state of transportation issues in the U.S., I’m afraid…)
So I was pleased to find Planning for Cycling by Hugh McClintock of the University of Nottingham. It’s a collection of chapters from a UK perspective, including chapters from several European jurisdictions. A few interesting bits of trivia from the book:

I’ve got quite a few notes on the book, available here.

2 thoughts on “Planning for Cycling”