I’ve been busy reading more on transportation and climate change over the last few months. Before I post any more “big” articles, I wanted to take a moment to praise one pair of figures from David MacKay’s great book, Sustainable Energy Without the Hot Air. It’s available free online, but I thoroughly recommend buying the elegantly typeset, figure-filled hard copy.
MacKay’s great strength lies in communicating numbers: using these simple, visual representations, a single consistent set of units throughout the book, and back-of-the-envelope calculations that are designed to illustrate the cases at hand, he’s assembled a solid book. MacKay doesn’t cover the politics or economics, and he doesn’t frame the book in terms of climate change, although that’s clearly the key underlying motivation.
Here’s the background: an example of a simple visual story, showing why burning fossil fuel reserves represents a massive change to the climate system. I’m going to paraphrase MacKay to cut to the chase, but if you prefer, please read MacKay’s original text, pages 241-243.
Throughout the book, MacKay uses a type of figure where the area of a box represents its size. The bigger the box, the bigger the number, and it’s really easy to visually compare different boxes.


“Until recently, all these pools of carbon [shown in the above figure] were roughly in balance: all flows of carbon out of a pool (say, soils, vegetation, or atmosphere) were balanced by equal flows into that pool. The flows into and out of the fossil fuel pool were both negligible. Then humans started burning fossil fuels. This added two extra unbalanced flows, as shown [in Figure 2].”

The flows shown in Figure 2 (right) are from fossil fuels to the atmosphere, and from the atmosphere to the surface waters. As shown, roughly one quarter of the fossil carbon winds up in the oceans on a short timescale of 5-10 years; recent research indicates that this may be reducing as the surface waters saturate, however. Some carbon is moving into vegetation and soil, perhaps 1.5 GtC/y, but this is less well measured. What is observed today is that roughly half of the fossil carbon stays in the atmosphere.
Now, throw one more number into the mix: if fossil fuels remain our dominant energy source, then carbon pollution under “business as usual” is expected to emit 500Gt of carbon over the next 50 years, with roughly 100Gt expected to be stored in the surface waters of the ocean (at 2Gt/year). By looking at the figure, it is clear that the amount of carbon in the fossil fuel supply dwarfs the carbon in the atmosphere.
The figure shows quite clearly that if we’re talking about burning a large fraction of the remaining fossil fuels, we’re talking about major disruptions in the carbon balance. Something has to take up the carbon—either the atmosphere, surface waters, soils or vegetation, and all data to date suggests that the atmosphere is where the majority of the carbon winds up. Given the size of the fossil fuel slice, it’s easy to see how a doubling or tripling of atmospheric CO2 could happen within 50-100 years.
And yes, there’s a lot of carbon stored in the deep ocean—but as MacKay makes plainly clear in his discussion, the timescale for ocean mixing is thousands of years. “On a time-scale of 50 years, the boundary [between the surface waters and the rest of the ocean] is virtually a solid wall.”
Plus, the figure shows two risk areas: vegetation and soils from vicious cycles. If the high temperatures (caused by high atmospheric carbon) kill off vegetation or melt the tundra and release methane, large stores of carbon from the vegetation and soils categories could wind up in the atomsphere easily—and from the size of those boxes, it’s clear that could be a catastrophe. (As it happens, the IPCC A1FI scenario expects emissions of 1800-2500 GtC by 2100—I’d guess that means that much of the easily accessible fuels are burned, plus a substantial net release of carbon from vegetation and soils.)
At any rate, I like these figures because they clearly show this concept. By using a simple visual representation of quantity, and separating the steady state out from human-driven changes, MacKay cuts to the heart of the matter. Now, for comparison, here’s an IPCC figure (from their technical reports) showing carbon stores and fluxes (source is AR4 figure 7.3): 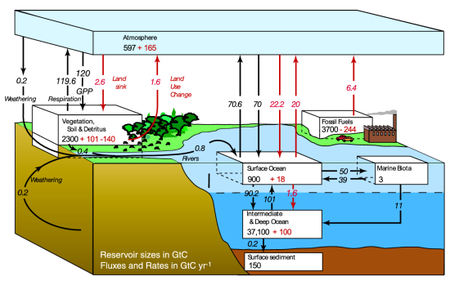 Confused yet? Black is preindustrial, red is human-caused. The IPCC figure can certainly be understood if you spend the effort, but it doesn’t leap off the page. Admittedly, it’s from a technical chapter that’s trying to communicate carbon fluxes rather than carbon stores; the comparison isn’t entirely fair. The IPCC has produced simpler figures (for other topics) in their policy-oriented chapters, but they could still borrow a few pages from MacKay’s book.