I’ve been a little baffled by the tar sands’ villainization in the climate literature for some time. While a few photographs can clearly show that the tar sands have dire impacts on the local environment (as a recent National Geographic special showed), I haven’t really understood why the tar sands have been singled out for so much venom in the climate literature. About two years ago, I first saw the stats: if you measure all emissions from extraction to the tailpipe (a “well-to-wheel” basis), the tar sands are between 15–40% worse than conventional oil. Why, then, is tar sands oil so much worse than—say—a vehicle with 15–40% poorer fuel efficiency? Here in Canada, the tar sands represent a lot of potential wealth and jobs; why should our oil get singled out relative to Saudi crude?
My reading recently took me past a figure that illuminated the problem for me in many ways. The figure below is adapted slightly from Farrell and Brandt, “Risks of the Oil Transition,” Environmental Research Letters 1(1), 2006, although I’m sure it can be found in many places in the literature. 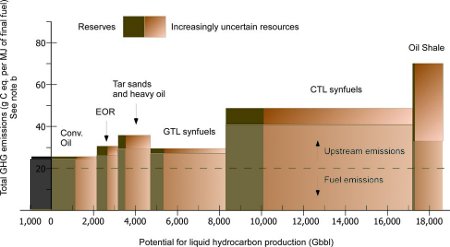 The regulatory tool that is currently being mooted to address this issue is carbon fuel content regulation. California’s ambitious Low Carbon Fuel Standard (LCFS) aims to progressively reduce the lifecycle carbon emissions emitted for each barrel of fuel burned, with an initial target of a 10% reduction in sales-weighted fuel carbon intensity by 2020. This avoids the rancorous process of picking winners and explicitly declaring the tar sands off-limits—instead, it simply requires that any sales of high-carbon fuels be balanced by low-carbon fuels (such as yet-to-be-commercialized cellulosic biofuels). If it works, it would effectively impose a disincentive on the use of high-carbon fuels, without explicitly banning them.
The Alberta government is pursuing CCS for the tar sands (with lackluster enthusiasm from the oil companies themselves). Given the Alberta government’s tepid and ineffective climate policies, many argue that this is simply a distraction or greenwashing. However, it could possibly be interpreted as a strategy to level the playing field for the tar sands relative to conventional oil. If many governments worldwide adopt some LCFS-like regulation to tackle climate change, regular tar sands oil will be more challenging to sell because it will have to be balanced by a large amount of low-carbon fuel sales. However, if CCS is implemented for the tar sands, then tar sands production would be GHG-equivalent to conventional oil, and equally attractive on the global market—except for the price of its inputs (natural gas) and the CCS costs.
Skepticism is still warranted. Carbon sequestration in the tar sands faces some huge obstacles:

Ultimately, this is why authors like Joe Romm are so scathing about the tar sands. North of the 49th, we have trouble seeing anything beyond our economy’s dependence on the tar sands and associated jobs and windfall of wealth.

6 thoughts on “Emissions and the Tar Sands”

WATCH: People who can't work from home should start receiving the #COVID19 vaccine at the beginning of May in #Ottawa.

Here's @VeraEtches on the rollout for those groups.

Clarifying some misunderstandings I’ve seen around this: the MSIX packaging currently required by the Store does not include meaningful sandboxing, this does not affect security. https://twitter.com/zacbowden/status/1384492044786147330

One week ago, I wrote this story for @TorontoStar about #COVID19 risk in daycares. https://www.thestar.com/news/gta/2021/04/14/with-covid-19-rising-in-daycares-in-covid-hot-spots-if-you-can-keep-your-kids-home-now-is-the-time.html

A few hours after my story went online, I learned my 2-year-old daughter had tested positive for COVID-19. Her likeliest exposure was her daycare.

1/ Ottawa-Gatineau #Covid19 geography. What is there to say? Just #StayHome except to get your AZ.

The only thing: Gatineau was about two weeks ahead of Ottawa, though I haven't heard why; Montréal's not doing this badly.

AI colorization strips away the vibrant colors from history and replaces them with a world of dull tans, muddy browns, and slate grays. (Notice how it removes the painted railing.) It reinforces our impression that the past was drab and lifeless--in contradiction of reality.

AstraZeneca dose #1. The best vaccine is the one they are offering you, now.

🤞that supply holds! 🇺🇸 Mr Biden - you don’t really want those 10 million AZ doses you’ve stocked up, do you?

All pregnant women in New Brunswick are now eligible to receive the COVID-19 vaccine, says the Department of Health.

M1 only ships in 8GB and 16GB configurations so far. Does this mean iPad Pro just bumped from 6GB to 8GB of RAM?

Microsoft is building a new app store for Windows 10 that focuses on revitalizing the storefront by relaxing policies around the kind of desktop apps that can be submitted to the store by developers. Details: https://zac.onl/3gmZaft