This is a follow-up to my earlier post about Monbiot’s book on climate change. In that post, I stated that I was interested in long-term emissions targets because they will probably constrain transportation planning over the course of my career. Now that I’m looking at the issue more closely, I’ve found some relevant research: a great report from Robin Hickman and David Banister in the UK, Visioning and Backcasting for UK Transport Policy or VIBAT. (Reference courtesy of Todd Litman, VTPI.) It looks at the transport problem in the UK through a similar lens as Monbiot, but with considerably more rigour. For the record, VIBAT is not yet published in a peer-reviewed journal, although it has been presented at academic conferences. To date, I have only read the executive summary and skimmed the rest.
Domestic transportation in the UK emitted 39 MtC/year (megatonnes of carbon per year) in 1990, the Kyoto baseline. It rose slightly to 41 MtC/year by 2000, and is projected to rise to 52 MtC/year by 2030 in a “business-as-usual” scenario. A recent Department for Transport white paper suggested new policies for the UK, and projected that the 2030 level would be 38 MtC/year if those policies were adopted, a very small reduction from 1990 levels.
Hickman and Banister took a more dramatic approach. They chose a target of 60% reduction in domestic UK transportation emissions by 2030 from the standard 1990 baseline, aiming for a 15 MtC/year emissions level. This is not Monbiot’s target of a 90% cut by 2030, but it’s still an ambitious choice, somewhat more aggressive than the official UK goal of 60% by 2050.
In the early framing of the paper, the problems of air travel are abundantly clear: UK international air emissions are currently 8 MtC, and might be projected to rise to 20 MtC by 2030. I can’t imagine a scenario where it would be politically acceptable for air travel to be given a bigger slice of emissions than all domestic transportation. As the authors state, “Reducing carbon emissions from international air travel should be a priority for research and action.” In the report, they focus on domestic emissions alone, and leave air travel and international shipping outside their scope.
The authors came up with two scenarios for the policy climate in 2030.

Hickman and Banister assembled a package of policies that would be deployed under each scenario, “backcasting” to find appropriate policies that match the vision. They found that the “New Market Economy” vision could not meet the carbon targets and fell ~10 MtC short, even with optimistic assumptions regarding future technology. The main reason for this was the ongoing growth in car travel: a business-as-usual scenario of +35% in travel would require a massive technological fix. By contrast, the policies that were politically acceptable in the “Smart Social Policy” vision were adequate for the task.
The figures below summarize the emissions changes (in MtC/year) associated with the policies in each package. Click to enlarge and see them side-by-side. (Sources: Fig. 4 and 5, Executive Summary. Resized to matching scales.) 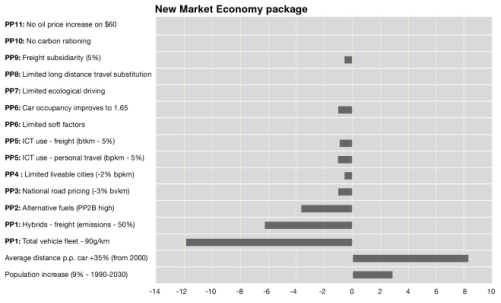 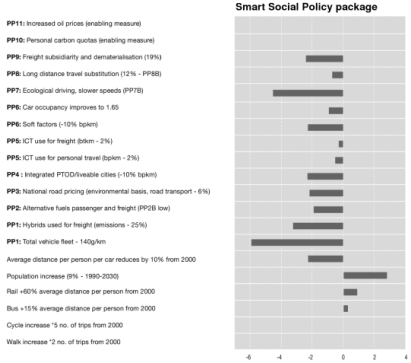 These results don’t particularly surprise me, but it’s still unusual to see a prominent academic like David Banister putting his name beside such a bold policy proposal. Beyond the usual recommendation of further research, the authors do attach one major caveat to their result: they have assumed that the policies they recommended do not interact and result in synergies. That’s a whopper; it’s entirely possible that synergies would result. Finally, I haven’t personally reviewed the assumptions associated with their emissions estimates; I’m sure many of them have a big margin of error. Still, while the exact impact of each policy is unknown, I wouldn’t be surprised if overall conclusion is still accurate: behaviour change will probably be necessary.
One side note tying back to my Monbiot posting, the Smart Social Policy vision required on two enabling measures: higher oil prices (either globally or locally due to taxes) and carbon rationing. I was surprised to see carbon rationing included in mainstream academic discussion, but it is apparently making inroads in the UK. (The main reference seems to be Meyer Hillman and Tina Fawcett’s book, How We Can Save the Planet published by Penguin.)
Finally, here are some pictures that quickly summarize the projections for modal share in the different scenarios: 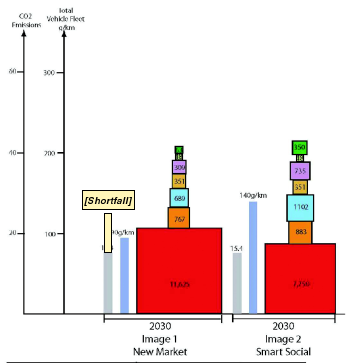 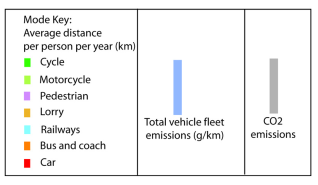 The size of each box tells you have many kilometers each person is projected to travel using each mode in a given year. This says nothing about emissions, just how far people travel and what mode they use for their travel. I like this visualization: it emphasizes the reduction in travel in the Smart Social Policy scenario. The scales on the left are for the two bars, indicating the carbon emissions and vehicle efficiencies in each scenario. (I’ve made one correction, indicated like [this]: they forgot to include the 10 MtC/year shortfall in the New Market Economy scenario.)
For reference, here are historical modal shares. The 2030 projection shown below represents the white paper policy projection, not the “business as usual” BAU scenario with 52 MtC/year emissions. 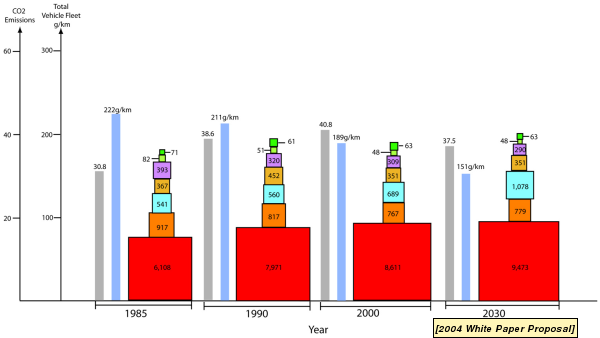