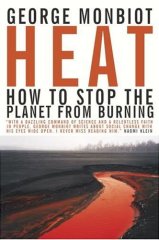 I’ve recently finished reading George Monbiot’s Heat: How to Stop the Planet from Burning. It’s an interesting piece from a widely-syndicated journalist, and it left me both alarmed and unsatisfied. I’ve held back on writing about it until I had a chance to read up a bit more on the underlying science and discuss the topic with more knowledgeable types, but I think I’m ready to comment.
For the anonymous visitors to this page, let me preface this by saying that I have zero expertise in this topic; I have no climate science training, and this represents my first stab at investigating the area. I am interested in this subject largely in terms of its implications for transportation/land use policy: to decide suitable long-term policies, I need a reasonable idea of the likely long-term acceptable level of carbon emissions.
At its heart, I think the book must be understood in terms of its intended audience: the environmental movement. Monbiot’s book is a call-to-reason for the movement, a plea to avoid the “aesthetic fallacy” of pleasing but impractical solutions: think high-speed rail, biofuels, voluntary conservation, or exclusive reliance on solar/wind power. He also urges some revisiting of traditionally demonised technologies, such as nuclear power and carbon sequestration. On these terms, the book is a valuable shaking-up of traditional environmental viewpoints. After establishing a target for emissions cuts, he devotes most of his book to investigations of the feasibility of current technologies for achieving these targets. His discussion of air travel and “love miles” is particularly prescient. The context for his book is exclusively the United Kingdom, and the solutions he proposed cannot necessarily be directly transferred elsewhere.
In this posting, I want to focus more on Monbiot’s target. He based the book on a simple argument, originally published in a 2006 column he wrote for The Guardian, which you can read yourself.

I’ve dug around a little to see how valid these assumptions are. As far as I can tell, Part A is extremely poorly understood, with both likely positive and negative feedbacks, of unknown relative magnitude. For one, the Intergovernmental Panel on Climate Change (IPCC) has not made any claims along these lines. Is it possible that runaway feedbacks will occur? Certainly ― we just have little idea of how likely it is. If you belong to the pessimistic wing of the environmental movement, you may find it easy to accept runaway feedback; the rest of us will have to treat it as a thought experiment and a worst-case scenario.
Part B sounds broadly reasonable. Like part A, part C is very poorly understood at present, but his choice of figure is in line with current estimates of the sink’s reaction to temperature. The target level in part D appears to roughly match with current estimates of the necessary “equilibrium” emissions level, but he assumes that we only work on the emissions end, and he doesn’t consider potential improvements of the performance of sinks. More importantly, the timeline in E appears to be unnecessarily aggressive and I can’t really establish the basis for this choice of target date; Monbiot relies on this near-future deadline to reject any new technological developments, but this is probably not entirely valid. Nevertheless, while the near-future deadline is not as tight as Monbiot claims, changes do need to be made quite soon.
Finally, part F conflates environmental needs and social justice ― admirable and probably necessary in the longer-term, but dreaming of a level of international fairness that is historically unparalleled. There are also “fair” solutions that may be precluded by such an approach: suppose Northern countries paid for the construction of highly efficient new infrastructure in Southern countries. It is possible that such a strategy might be equally fair and more cost-effective than retrofitting existing infrastructure in the North, but it is excluded from consideration by Monbiot’s approach to fairness. In some ways, Monbiot’s conception of an “equal ration” looks like a conservationist’s dream: it forces everyone to learn to conserve energy and carbon. Still, given the magnitude of the change that Monbiot believes necessary, his argument that only equal rations would be politically viable is fairly credible. He drew an analogy to rationing during World War II: in times of great hardship, conservation of scarce goods is unlikely to work if some parts of the population (e.g., the rich countries) were excluded.
In support of my analysis, allow me to introduce exhibit B: a peer-reviewed paper tackling the same topic. (Disclaimer: I came across this paper after it was referenced by RealClimate in their review of Al Gore’s movie. It’s a fairly reputable blog run by climate scientists.)

Before looking at their differences, I would first like to emphasise the similarities between this paper and Monbiot’s argument. Pacala and Socolow considered target atmospheric CO2 concentration levels of 500±50 ppm (Monbiot: 380ppm), aiming to restrain global carbon emissions at current levels (7GtC/year) from now until 2054 and then decreasing to ~2-3.5 GtC/year by 2125 (Monbiot: 2.7GtC/year by 2030). The paper aims to show that emissions can be reduced using currently available technologies that have already been proven at an industrial scale. Like Monbiot, they based their projections largely on the IPCC’s 3rd Assessment Report (AR3) from 2001, and do not include information from 2007’s 4th Assessment Report. They assumed a weak land+ocean carbon sink of 2.4 GtC/year (Monbiot: 2.7 GtC/year). They proposed many of the same tools to reduce carbon output: reduced use of vehicles, more efficient vehicles, efficient buildings, reduction of coal usage, additional nuclear and wind power, and/or carbon capture and storage at remaining coal plants. However, unlike Monbiot, they suggested that a small subset of this list of technologies would be adequate, and they considered technologies unsuitable for the UK like solar power. Finally, they agreed with Monbiot that air travel is particularly difficult to decarbonise.
Let me start with their graphs of different emission reduction scenarios, taken from page 41 of their supplementary material: 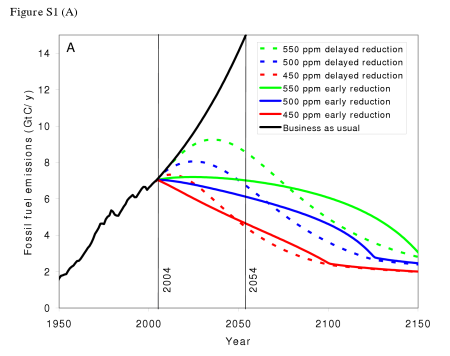 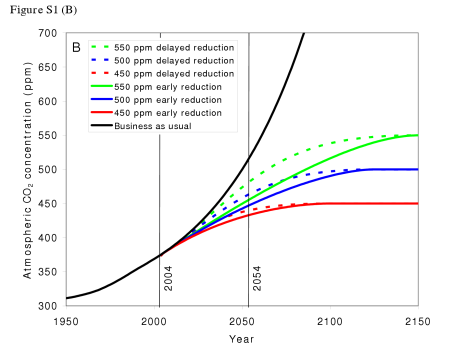 The top graph shows different scenarios for how much carbon humans emit; the bottom graph shows the resulting atmospheric carbon level. The black line here represents “business as usual,” and each pair of coloured lines represents a different target stable carbon level. The effect of delaying reductions is clear: to achieve the same stabilization level, a more aggressive reduction rate is required. The final stable global emissions level is roughly 2-3.5 GtC/year, in the same ballpark as Monbiot’s target level (2.7 GtC/year), but achieved between 2100 and 2150 instead of aiming for a 2030 deadline. In their main paper, they focus on the 500ppm early reduction scenario. They omit any discussion of the associated temperature rises; my understanding is that a 450ppm target means a rise of 2.1°C (range: 1.9° to 3.1°), and a 550ppm target means a rise of 2.9°C [IPCC AR4 p. 791].
Pacala and Socolow devoted a good deal of text in their supplement to the discussion of terrestrial carbon sinks, emphasising the huge lack of knowledge in this area, which is quite interesting. I won’t continue to belabour the differences between Monbiot and Pacala and Socolow, but I would encourage you to read both. Pacala and Socolow are particularly worthwhile, although considerably harder to read and understand. From Pacala and Socolow’s work, it looks like a 60% cut from today’s global emissions is probably necessary, but may not need to be complete until closer to the end of the century. Aggressive reductions would still be needed today to have any hope of reaching that target. Finally, while the ultimate share of emissions may not be strictly equal per capita, it’s a safe bet that the cut for carbon-intensive economies (like the UK, Canada or the USA) will be considerably higher than 60% ― perhaps not the 90-94% that Monbiot suggests, but it’s hard to imagine that anything less than 70% would work. I make no claims that this is a “scientific” estimate; it is simply my educated guess on the basis of a very cursory reading of the literature.
Unfortunately, Monbiot’s aggressive deadline (2030) and a set of drastic assumptions make his book feel alarmist. While there is indeed much to be alarmed about, his book really feels like the edge of despair; the proposals are so extreme that they make the task appear insurmountable. (For a good discussion of alarmism in popular discussions of climate change, see RealClimate’s positive review of another interesting book, Six Degrees.) I’m inclined to describe Monbiot in the same way that RealClimate commenter Lou Grinzo described James Howard Kunstler: “I’m increasingly convinced that […] Kunstler is intentionally yelling fire in the theater because that’s the only way to alert enough people to a situation that could, with enough indifference, turn into a real conflagration.”

“While we’re on this unit, the doctors (and nurses) are just being horrifically, horrifically abused,” she said.

“(Health-care workers are) being sworn at, they’re being told that COVID isn’t real and (patients) don’t want to be intubated,” Christensen said.

If you’re not concerned by the January 6 insurrection and the threat Trumpism poses to our Republic, you’re not aware of history, or you’ve not been paying attention, or both. https://www.washingtonpost.com/opinions/2021/09/23/robert-kagan-constitutional-crisis/

A pandemic of the unvaccinated.

@imgrund Hard to know if any establishments will accept this. I saved my proof PDF on my phone and have it accessible via Shortcuts app :) you can even choose the icon 😅

I'm leading the effort to build out @RecursionPharma's Canadian presence. Do any of these roles sound interesting to you? Send me a DM and let's talk about them! https://twitter.com/RecursionPharma/status/1440331496435240966

In case you missed it, with today's update to #iOS15 Safari has enabled by default #WebGL2 ! 🥳🥳

Thank you @GargulMark for creating a cartogram (each riding has the same area) of the Canadian election results #elexn44. Stops me complaining all night that the usual maps are misleading to the eye... https://commons.wikimedia.org/wiki/File:Canadian_Federal_Election_Cartogram_2021.svg