My main activity of 2019 was a port of the Mental Canvas 3D drawing tool from Windows to iOS. About 75% of my effort was user interface code, maybe 15% on graphics and 10% other platform issues.

What combination of circumstances led to this approach? Mostly just a real life constraint: a desire to rewrite/redesign as little working code as possible, and keep the codebase’s size down.

END_OF_DOCUMENT_TOKEN_TO_BE_REPLACED 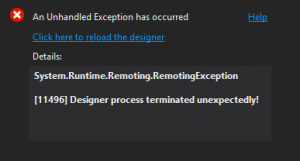 In September 2017, Microsoft released a rewritten XAML Designer program within Visual Studio. It’s only enabled for a tiny fraction of apps and got a very quiet launch, so almost no one knows about it. The new version runs as UwpSurface.exe instead of XDesProc.exe and is only enabled for UWP apps targetting Fall Creators Update SDK or newer.
For my app, the new Designer simply broke everything initially. Why? Presumably for technical reasons, it only works with {Binding} and not {x:Bind} – but this was not made at all clear in the launch announcements. UWP developers have been encouraged to use {x:Bind}: it’s compiled, type-safe and faster, and x:Bind functions are the only way to do multibinding. For my 64-bit app, I never got design data or design instances working under XAML Designer (xdesproc), so I relied entirely upon {x:Bind}‘s FallbackValue parameter to preview different modes of my UI – but {Binding} has no equivalent mechanism.
After a lot of tinkering, I’ve finally learned a few important things about the new XAML Designer, and got a usable workflow.

My strategy for a C++/CX app

It’s not ideal. But… it’s better than nothing.

Despite the difficulties, I do look forward to further improvements in the XAML Designer. The old version was dated and crash-prone, and a clean slate rewrite was the only reasonable path forward. It’s just going to take some time to reach feature parity with the old version, which will mean some teething pain for “guinea pig” developers like myself. 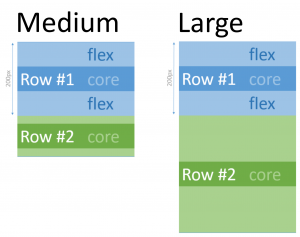 I recently found a neat XAML user interface trick that I hadn’t seen in my usual resources. Suppose you have:

XAML makes it easy to do proportional space allocation – e.g., give row #1 two-thirds and row #2 one-third by giving them “2*” and “*” height respectively. But it doesn’t do priorities.
The trick: combine a massive star size with a MaxHeight. That looks like this: 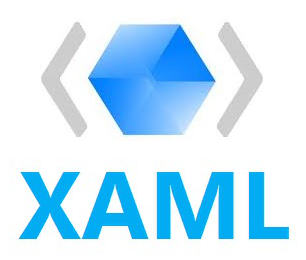 I’m a latecomer to Microsoft’s user interface technologies. I never used Windows Framework (WPF) on top of .net and I never used Silverlight on the web. The last year was my first taste of these tools through the XAML framework that is part of the “Universal Windows Platform” (UWP) – that is, the Windows 10 user interface layer (and Win8).
XAML has steadily evolved since the WPF days, and it took a little while to really understand the different major eras of the technology, especially since the UWP flavour of XAML strips out some of the older syntaxes in the name of efficiency on mobile platforms, better error checking at compile-time and code readability and ease-of-use. The technology’s old enough that much of the Google search hits and StackOverflow results are not applicable on the modern UWP platform.

So what were a few of my first lessons when using XAML on UWP?
END_OF_DOCUMENT_TOKEN_TO_BE_REPLACED

So far. Before schools.

Regarding "the second wave" in Ottawa. This figure shows that, after the "first wave", we had a peak in July and now we have the joint challenge of again turning today's resurgence into a peak that is as low as possible, to avoid an unmanageable level of COVID-19 in the future.

As we come to the end of the longest week in history, today's statement from @VeraEtches deals with testing & schools. It's basically a must-read at this point. Take care, Ottawa.

IMPORTANT : Waiting for #COVID19 results? Please, pick up the phone for blocked/private numbers. They may be coming from OPH case managers. They will leave a voicemail BUT it may take several hours before your call is returned. #HelpUsHelpYou

NOTE: You must still self-isolate

Toronto Public Health suggests the increase in cases are traced to people in bars and nightclubs.
http://ow.ly/Xx4u50BvBar

This stuff is insane. Cult, indeed.

A friend was alerted to a possible exposure due to the app. She went and got tested and was positive for Covid. NO symptoms. She would have been teaching in a classroom right now but is instead safely in quarantine. Get the app! https://twitter.com/aradwanski/status/1306966813457223686

A quarantine mood: my sources in Montreal tell me that the “ça va bien aller” rainbow signs slowly morphed into “ça va aller” signs and then today a friend saw one that was a rainbow with TABARNAK written across it